How did utah become a state

How did utah become a state

When Europeans arrived in Utah, the land was inhabited by various Native American tribes. One of the largest tribes was the Ute people from which Utah gets its name. The Ute lived in temporary homes called tepees and hunted buffalo for food. Other Native American tribes included the Paiute in the south, the Goshute in the west, the Shoshone in the north, and the Navajo in the southeast.

The first Europeans didn’t arrive in Utah until the 1700s when Spanish explorer Juan Antonio de Rivera visited in 1765. He claimed the land for Spain and found the Colorado River. In 1776, another expedition entered Utah from Mexico. It was led by Franciscan priests looking for a way to California.

In the late 1700s and early 1800s, a few more people arrived. They were mostly fur trappers looking for new hunting grounds. These men included Jim Bridger who found the Great Salt Lake and Jedediah Smith who discovered a pass through the Rocky Mountains. One of the most influential explorers was American John C. Fremont. Fremont made detailed maps and notes of the territory which was of great help to future settlers.

In 1847, a group of 148 Mormons traveled to Utah led by Brigham Young. They settled in the Salt Lake Valley and named their settlement the Great Salt Lake City. The next year, 1,650 more Mormons arrived. Soon the area grew rapidly with new settlements forming such as Ogden, Provo, and Farmington. The Mormons named their land the state of Deseret and by 1850 there were over 11,000 Mormons living in the area.

In 1848, the United States gained control of Utah from Mexico as a result of the Mexican-American War. The Mormons wanted to join the United States as the state of Deseret, but instead the land became the Utah Territory. Over the next several years, disagreements between the U.S. government and the Mormon leaders kept Utah from becoming a state. It wasn’t until January 4, 1896 that Utah was admitted as the 45th state.

The 1860s marked a time of progress for the state when Utah became more connected to the rest of the country. In 1861, the final link of the First Transcontinental Telegraph was connected in Salt Lake City. Just eight years later in 1869, the last spike of the First Transcontinental Railroad was placed at Promontory Summit, Utah. Now Utah was no longer as isolated from the rest of the nation. 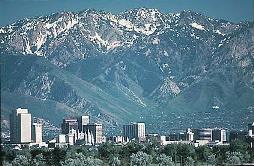